On March 29, 1918, John H McGlynn attended the event at the Rochester Convention Hall and expressed his desire to enlist.  Ten local men joined up and headed out on April 1, stopping first at Fort Slocum in New York, then continuing on to Camp Wadsworth at Spartanburg, South Carolina. 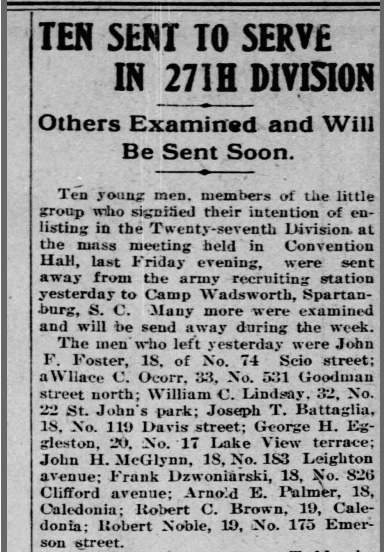 Camp Wadsworth had been founded in 1917, and training there was rigorous in order to prepare the men to travel overseas.  Major General J.F. O’Ryan had traveled to Europe and toured the British and French Armies to learn the most modern techniques in warfare and brought that information back to the recruits.  John spent only about a month at the camp before being sent to Europe.

In early May, the men headed from South Carolina to Virginia to sail to Europe. On May 10th, John and his brother Maurice shipped out from Newport News, Virginia on the H.M.S. Kurtz.  The trip to France would take about 7-14 days.  When they arrived in France, they awaited their assignments.  Surely they expected to be enjoined to the American Forces, but on May 27th they received orders to entrain for the British region north of the Somme, indicating they would be joining with the British soldiers. The men of the 27th Infantry trained with the British for 10 weeks.  The 27th was to be fighting with the British, as part of that force, and thus needed to become skilled in the weaponry, methods, and customs of the British army.  Rations and supplies were received from the British army.  In effect, and over time, the American 27th (and also the 30th) division became a small part of the British army. The inexperienced, but enthusiastic, American doughboys reinforced and reinvigorated the four years battle-worn British soldiers.

The units of the 27th Division were attached to the British in September when an offensive was launched against the impregnable Hindenburg Line.  While the Allied forces were ultimately victorious, both sides felt heavy casualties.  John was gassed in the battle; he would later receive a purple heart due to his injuries.

It is unclear if John was still at the Base Hospital on November 11, 1918.  His injuries were described as “slight”, it is likely he was back with the rest of his unit at the conclusion of the war.

On February 28, 1919, the Mauretania left Brest, France for New York.  They arrived March 6 to a hero’s welcome in New York City. They then continued on to Camp Merritt in New Jersey.